Your checklist is on the way to your inbox

Look for an email from ER@engineeringradiance.com

The migraine community has loved our checklist, but asked us for a deeper toolkit, which is why we also created an online course called the Ultimate Migraine Relief Course that provides guidance on putting the checklist to work for you and getting on track quickly.

Migraine relief is not one-size-fit all which is why we’ve created a systematic approach to help you find your unique combination to squash migraines in their tracks whether they are triggered by thunderstorms, hormones or have become chronic!

With this online course you will:

What is having a migraine relief system that works worth to you? 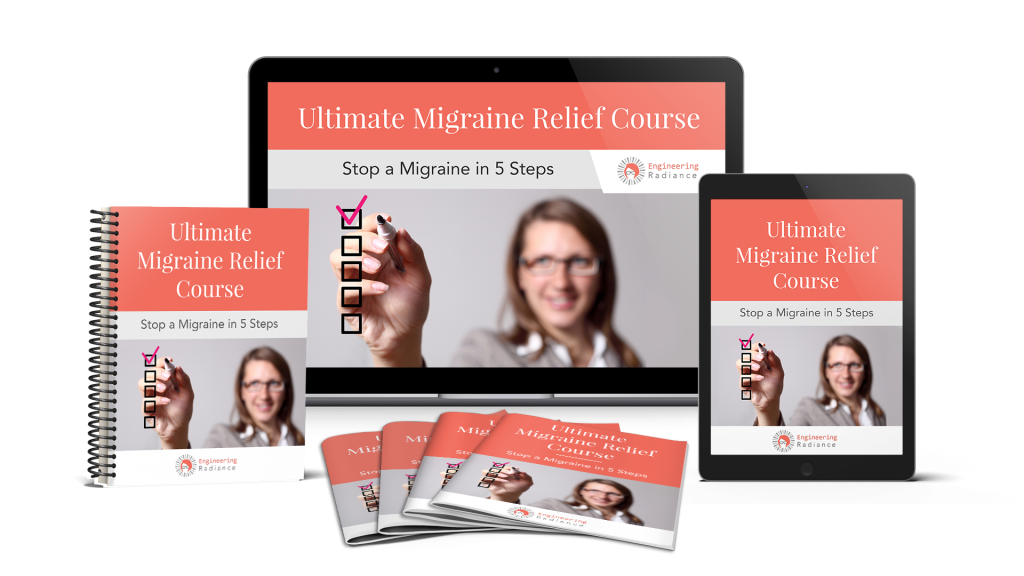 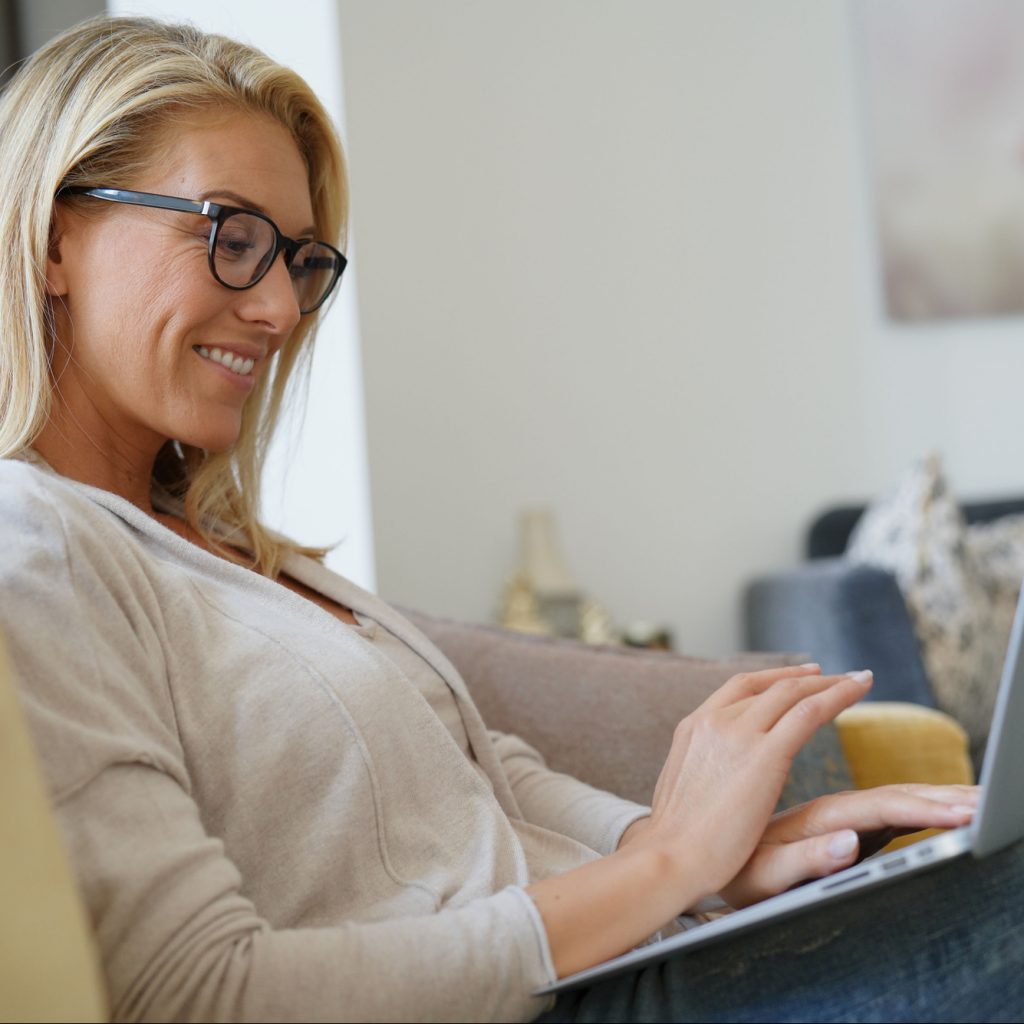 Section 1: The Checklist Method, how to systematically and reliably get relief

Section 2: How to get the maximum relief from the top natural remedies including essential oils, meditations and ginger.

Section 3: Beyond relief - finding the root cause 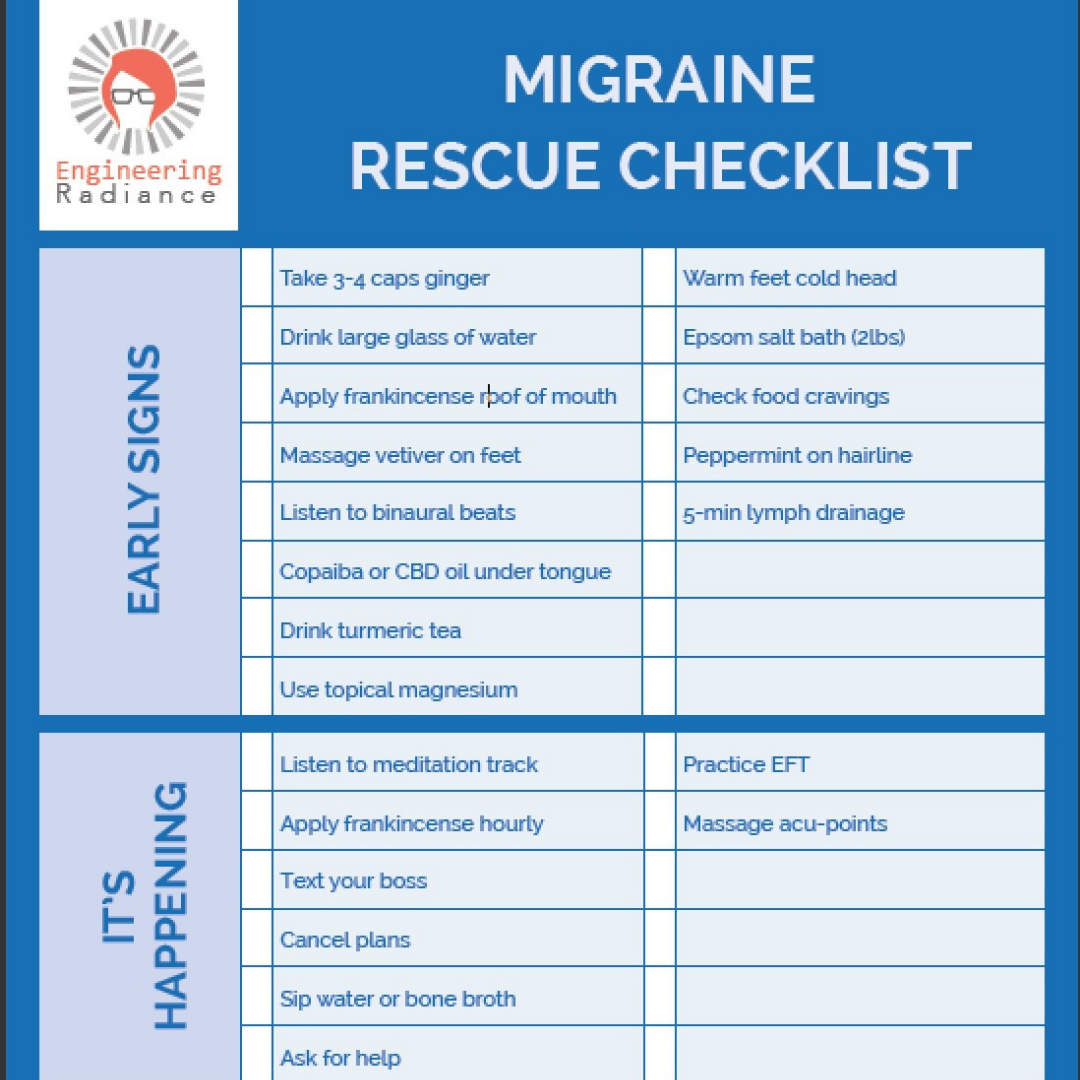 Your own printable checklist

Customize your own printable Migraine Rescue Checklist to follow when your brain goes foggy.

I signed up because some of the items on the relief checklist were new to me and I wanted to know how to use them and the video library is perfect - short and to the point. Now I've started using binaural beats, ginger caps and PastTense oil when I start to feel a migraine coming and I have hardly had to take my Imitrex. There's still lots to learn, too!

00
Days
00
Hours
00
Minutes
00
Seconds
Sorry, the bonus offers have expired. Reach out to us at info@engineeringradiance.com if you have questions. 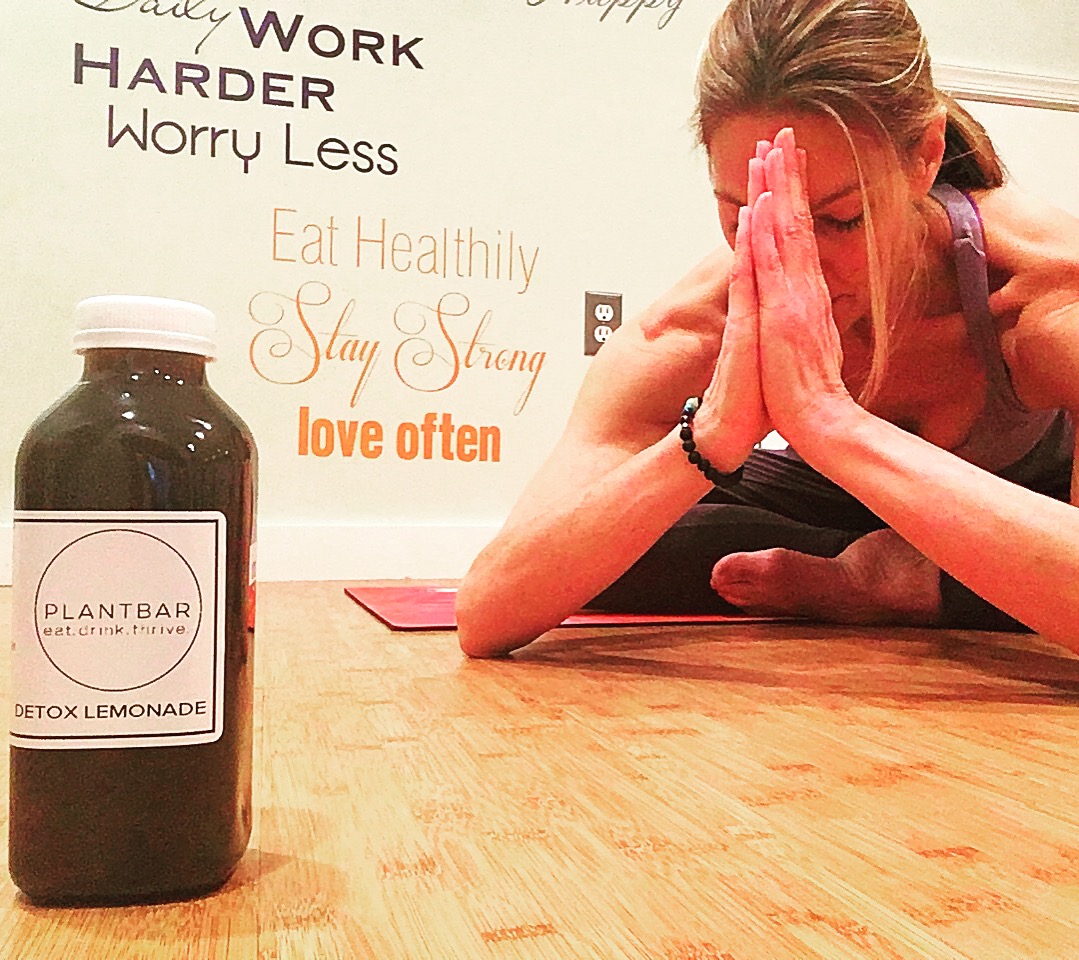 Learn what neuroinflammatory food additives everyone with migraines needs to avoid in this guide written by Mira Dessy, The Ingredient Guru. 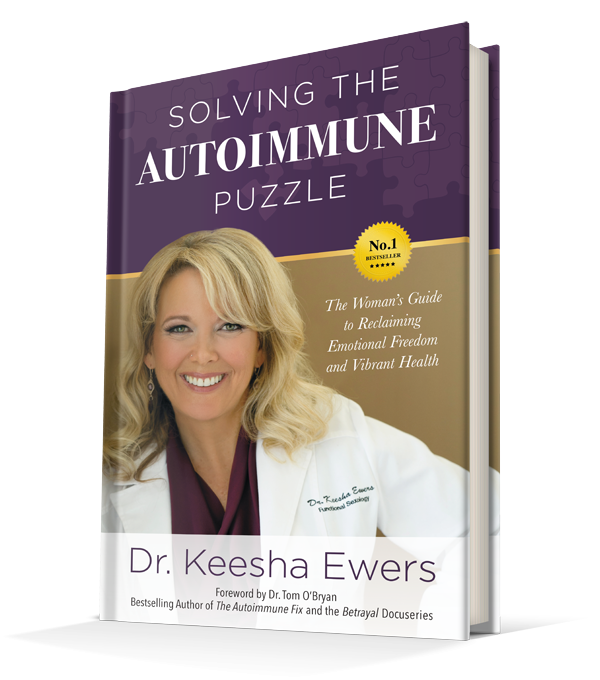 Did you know that migraines are often an alarm bell for autoimmunity? Functional medicine and women's health specialist Dr. Keesha Ewers shares why and what to do about it.

Start learning the MOST effective natural relief methods in minutes. 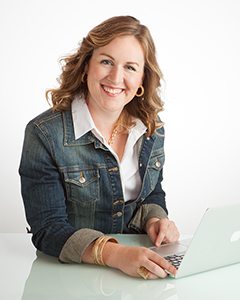 Erin Knight, founder of Engineering Radiance, believes that no one should miss out on life because of headaches, pain or fatigue. Erin has her Masters in Pharmaceutical Engineering from the University of Michigan and advanced training in functional nutrition and nutrigenomics.

She suffered from debilitating migraines for over a decade before uncovering the underlying biochemical causes and went on to reverse engineer what worked. This led to the development of her 4-step Migraine Freedom® process that is now a blueprint for thousands of people looking for root-cause solutions to their migraine pain.

After traveling the world as a sought after process improvement and training consultant, Erin left the pharmaceutical industry to help people realize vibrant health by thinking about their bodies like an engineer. In this course she shows you how to apply the same engineering systems and strategic approach that will finally help you get results from simple, natural relief techniques.

Although we are happy to work with you 1:1, by taking this course first, you can save about $500 while you learn the foundations & strategies...

PLUS you'll always have this amazing library of how-to videos to refer back to.

Questions? Just email us at info@engineeringradiance.com .

Megan felt backed into a corner. She hated needles and the idea of having surgery, but having gotten nowhere with prescription migraine drugs and finding that the preventative drugs left her groggy and dealing with GI distress, she was almost ready to try Botox or even the implanted device her doctor had suggested may help.

Desperate and at her wits end after trying everything under the sun recommended for migraines, she decided to take a chance and enroll in the Migraine Freedom® coaching program.

In her first few sessions she was surprised to learn that by layering natural relief techniques in a certain way, using some she had already tried and some that were new to her, she developed a game plan that reliably could stop a migraine or at least knock it down to something tolerable so she didn't have to call in sick (again).

The first time it worked, she called - so excited - "I have good news, I tried our lasted combination yesterday when I felt a migraine starting to come and it never came!!"

Megan's story is fairly typical... it takes a little experimenting, but when you know what levers to adjust and how to strategically apply natural relief techniques and anti-inflammatories like ginger, essential oils, breathing exercises and so on... it isn't magic. It's just a method.

Try this online course and our methods risk free for 60-days and if you do not feel as though you've learned a better migraine relief strategy, just send us a message and we'll refund your money, no questions asked.

Stop living life on the sidelines - discover Freedom from Migraines and start participating in the life you dream of. 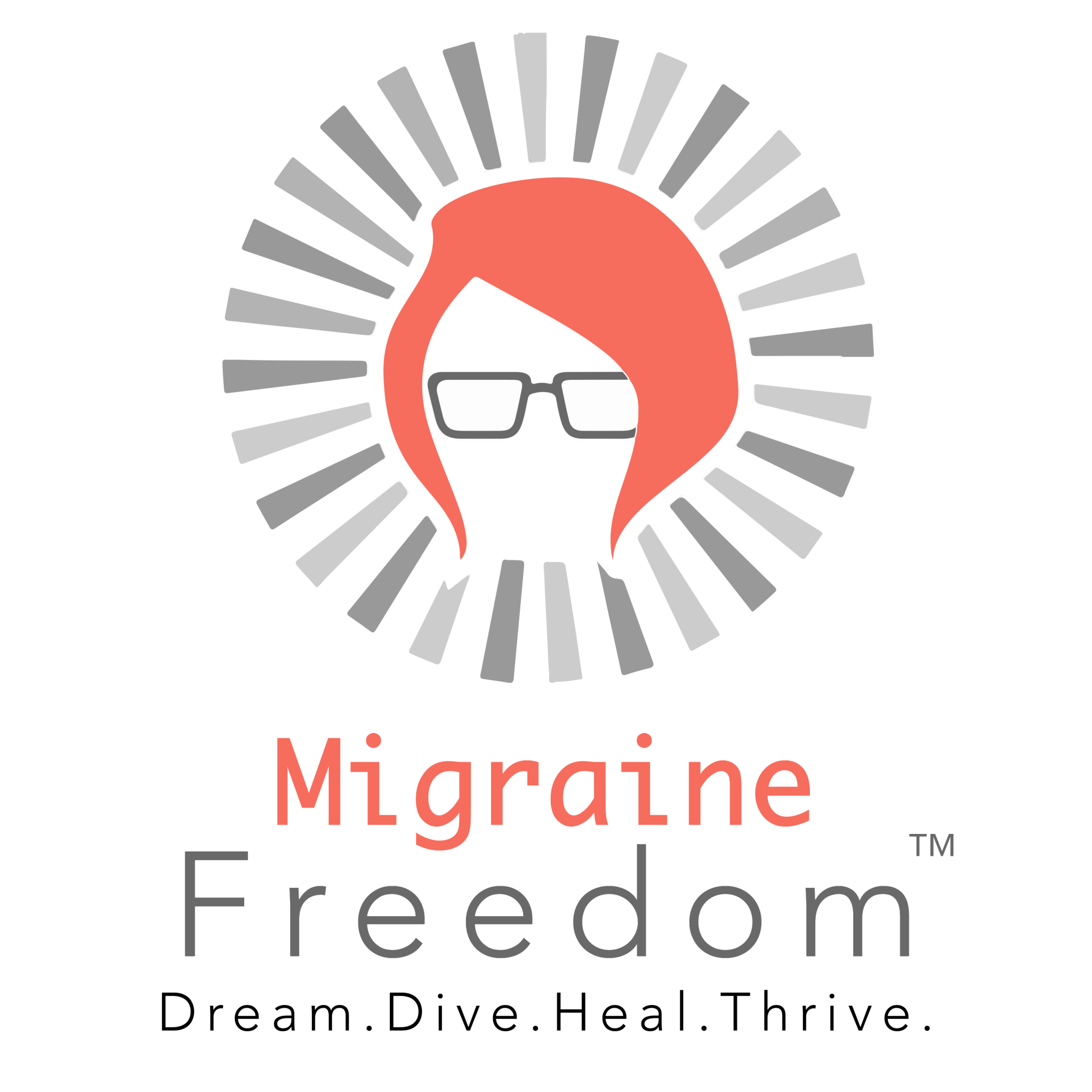